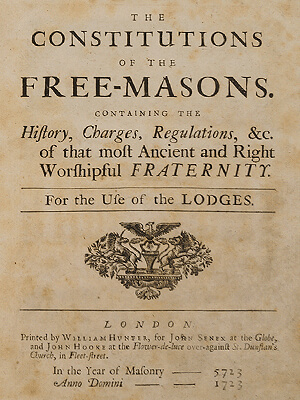 Freemasons know about (or at least have heard of) the book of which the title page is pictured above. For those unfamiliar with some of the older type characters, the modern English script for the above says: The CONSTITUTIONS OF THE FREE-MASONS. Containing the History, Charges, Regulations, etc. of that most Ancient and Right Worshipful FRATERNITY. For the Use of the LODGES. To paraphrase a Legendary Anchorman, “for Masons, it’s kind of a big deal.” It’s extra special for Minnesota Masons, because we own an original printing…one of fewer than 20 known to exist. You may know quite a bit about this seminal work; likewise, you may not know anything about it at all. Whatever the case may be, we hope you enjoy reading about the topic, and that you learn something from this post.

Written by Scots Presbyterian minister Rev. Dr. James Anderson, the volume is most regularly thought of as the first compilation and counsel for the rules of conduct by which Freemasons should abide. It was created at the request of the Duke of Wharton, for presentation to the Duke of Montagu, the second and third Grand Masters of the Grand Lodge of England. To clarify: at that time, the Grand Lodge of England consisted of the Lodges in the City of Westminster and London only…those outside of London would and did have other ideas!

The structure and components of Constitutions are:
1. Dedication
2. History of the Craft
3. Charges (six, with sub-points )
4. Payne’s Regulations
5. The manner of constituting a new Lodge
6. Songs for the Master, Wardens, Fellow Crafts, and Entered Apprentice.

As noted previously, the work was dedicated to the third Grand Master of the Grand Lodge of England, by then current Deputy Grand Master, J.T. Desaguliers. As was common at the time, the author(s) would often inscribe a volume to a Person of Importance as a gesture of deference to their position, and to curry favor.

Forty-eight of the 91 pages in Anderson’s compendium are about the “history” of the Craft. Of the 48 pages, there is an equivalent of approximately 20 pages of footnotes, which are primarily “asides.” Rev. Dr. Anderson regularly makes lengthy commentary on or about a situation or historical event, unlike what we consider footnotes or endnotes today— noting a reference or source.

The history itself is a product of the Enlightenment, (or Neoclassical Period) when there was a resurgence of interest in Classical literature. So it was not much of a jump for Anderson to wax poetic about figures in ancient Asia Minor, Greece, and Rome. He continued in the established fashion of fanciful, imaginative tales with a mythical lineage, using famous names (stating they were Masons), and drawing a series of connections to Masonry in order to tie the fable to the present day. Of course, most of his story has no foundation or proof. Although a century too early, Anderson’s “History” would be right at home in the Romantic Period. Nevertheless, it helped sell books!

A synopsis/condensation of each is listed below.
1. Of God and Religion*
2. Of the Civil Magistrate, supreme and subordinate. (Obey the laws of your land.)
3. Of Lodges. (Attend! It is a harmonious society of good men.)
4. Of Masters, Wardens, Fellows, and Apprentices. (Chosen on merit.)
5. Of Management of the Craft in Working. (Honest work receives honest pay.)
6. Of Behavior, when:

*Upon review of the Charges, it became evident to Anderson’s contemporaries that he had taken some liberties with the generally accepted methods and beliefs about “how one conducts Masonic business.” Charge number one, as written by Anderson, caused the most controversy because it no longer required a member to be a Trinitarian Christian. In hindsight we can see that it was the proper move, but at the time of issue it was quite questionable and polarizing.

A wrap-up to the Charges states that a Mason’s actions overall should be done in and to preserve Brotherly Love.

First compiled by George Payne, the 39 topics were simply re-written by Anderson for his book. Much of the regulations’ substance is familiar to us today, containing information about Officers and their duties, protocols and regulations for the Grand and Subordinate Lodges, and so on.

The English Grand Lodge calendar is constructed around quarterly meetings / Communications. Accordingly, the Regulations specify in some detail about what and when business is conducted, and the procedures to do so. Surprisingly, a great amount of detail is set forth about preparations for a Feast at the Annual Communication.

I would be remiss if I didn’t mention an unintentionally humorous passage from Section 38, which has an excellent example of how the English language changes over time. It’s regarding the closing moments of an Annual Communication, just after the Feast. To quote, in part: “The Grand Master or his Deputy, or some other Brother appointed by him, shall harangue all the Brethren, and give them good advice…” Today, we think of a harangue as something negative; however, in the speech and lexicon of Payne’s day, it simply referred to a public speech or an oration!

The Manner of Constituting a New Lodge.

Songs for the Master, Wardens, Fellow-Crafts, and Entered Apprentices.

Being a convivial group (remember, they often met in taverns), it wasn’t unusual to enjoy celebratory songs while having eat and drink at the Festive Board. The first two were penned by the Constitutions’ author, James Anderson, and recount his history of Masonry. The Fellow-Craft’s Song and the Entered ‘Prentice’s Song were written by Charles Delafaye and Bro. Matthew Birkhead, respectively.

This note is made for the Master’s Song: “To be sung with a chorus, when the Master shall give leave (no brother being present to whom singing is disagreeable) either one part only, or all together, as he pleases.” One can only imagine just when this was sung, as it’s in five sections, with five or six verses in each section. (Your narrator today, though a musician and gifted with patience, would find it unbearable.)

The Warden’s Song is a shorter history, but it still has 13 verses. The lead-in note states: “To be sung and play’d at the Quarterly Communication.” The Fellow-Craft’s Song is a narrative of the wonders and glories of the individual Mason, and the Craft as a whole. Instruction for it is “To be Sung and Play’d at the Grand Feast.” The Enter’d ‘Prentice’s Song directs Masons: “To be sung when all grave business is over, and with the Master’s leave.” In other words, this jaunty tune may be sung at the close of a Lodge Communication.

So culminates our brief overview of James Anderson’s Constitutions of the Free-Masons. It may not seem much to us today, but when first produced, it was monumental. Up until that that time, there was no single tool for guidance in the NEW society of Freemasons. In a modern-day sports term, Constitutions was the “playbook” for how lodges were to meet, act, and transact business. We owe a debt of gratitude to that Scots Presbyterian minister, for helping us Masons to work and act decently, and in order.

Special thanks to MWB R. Stephen Doan, for his counsel.